Your browser is not supported. Please update it.
Book now Save 10%
LanzaroteTenerife

Learn how a submarine works

In our online Kids Club section, you can learn how a submarine works, build a model submarine, enter our colouring competition, plus more.

How a submarine works

A submarine goes up and down in the sea by using ballast tanks.

When the submarine is at the surface, its ballast tanks are filled with air, thus making its density less than that of the surrounding water. In order to submerge, the ballast tanks are filled with water, making the overall density of the ship higher than the surrounding water. When the submarine submerges in the water, compressed air is continuously supplied in order to support life inside it. Also, the air from the ballast tanks is pushed out with the help of pumps.

Hydroplanes, small movable wings at the stern, help to adjust the angle of dive. The wings are so arranged that the water moves over the stern area, pushing it upwards and thus aligning the submarine in a downward angle. Most of the organisms in the ocean depend on sunlight. Plants and bacteria, such as kelp, seagrass and photosynthetic plankton, use light to make energy through a process called photosynthesis. Sunlight is the basis (beginning) for this food chain. Sunlight also warms the ocean’s surface. This is important because it makes the water warm enough for animals to live in and is a driving force for some currents. As sunlight enters the ocean, it starts to be absorbed.

The ocean can be broken down into three vertical zones based on how much light it receives. The first zone, or euphotic zone, extends from the water’s surface to about 50 meters depth, depending on the time of year, the time of day, the clarity (clearness) of the water and the presence of clouds. This is the part of the water column where there is still enough light for plants to photosynthesize. All plankton, kelp forests and seagrass beds are found in the euphotic zone.

The next zone is the disphotic zone, which extends from about 50 meters, or wherever the euphotic zone ends, to about 1,000 meters. In this zone, there is enough light for organisms to see, but it is too weak for photosynthesis to happen. If we were to venture into the disphotic zone, we could watch the visible light disappear as we travelled deeper. Once we reached the aphotic zone, there would be no light. This zone extends from about 1,000 meters depth to the ocean bottom. Animals in this zone are rare, but they do exist. Think about the thriving hydrothermal vent communities, which live and prosper without sunlight.

Some animals in the aphotic zone create their own light. This is called bioluminescence. 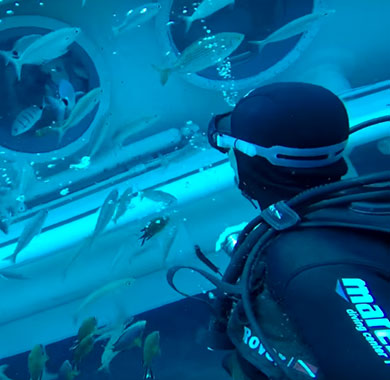 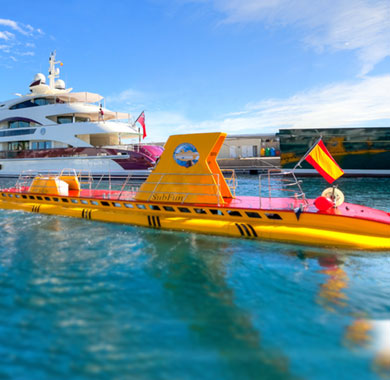